Implementing business software is one of the most challenging tasks a CEO can take on. Whether you're converting to a new Enterprise Resource Planning (ERP) platform to run operations or adding a more powerful Customer Relationship Management (CRM) system to improve sales, when you take the leap from one system to another, it is always a high-stakes, high-risk, high-stress experience. Here are five valuable lessons for your next software project.


Technology companies often scramble to sell their systems to large, enterprise clients to prove to all other interested parties that their technology can 'take a licking and keep on ticking'. Having a complex, large-scale, high-profile client today can help bring in lots of new deals tomorrow. One of the largest and most complex clients for any software company is the Big Apple – the City of New York itself.  New York City is in constant need of new technology, and spends hundreds of millions of dollars every year to upgrade and expand its capabilities.

It's the signature project everyone's talking about - some with passionate enthusiasm and others with endless disdain. It's CitiBike, the public bike-sharing system launched in New York City in June of 2013. The system's bright blue bikes – co-branded by CitiBank, the network's financial sponsor - are popping up all over New York.

The bikes are proven technology themselves - first engineered for the harsh conditions of Montreal, Canada and now used successfully in Boston, Washington, Chicago, Toronto and London.

For CitiBike to work, however, there is a sophisticated database that operates behind the scenes - registering members, taking payments, releasing or receiving bikes, and tracking the status of each bike and dock in the system. However, due to a contract dispute between the builders of the bike share system and the company that wrote the original software (the version that worked), CitiBike launched in America's largest city with essentially unproven software operating behind the scenes.

For New York, the unfortunate result is a horribly unreliable software system mucking up the reputation of America's largest bike share implementation to-date.

According to news reports, New York City was not originally aware of the legal dispute between its vendor and a mission-critical subcontractor, and did delay the roll-out until promised enhancements to the software were completed. However, any new system is just that - new. Therefore, New York needed to completely rethink its rollout strategy in light of the fact that it was in effect suddenly riding a new horse on the way to cross the river.

There is perhaps no more mission-critical technology that a government can implement than its 911 call-taking platform. When we dial 911 in an emergency, we expect an immediate and accurate response.

Following 9/11, the City of New York began implementing a number of strategies to enhance emergency responses. One of those, called Unified Call Taking, was intended to replace the city's longstanding borough-by-borough system of local emergency dispatchers, further separated by agency (i.e. fire dispatchers separate from police dispatchers, separate from EMS dispatchers), with an integrated, all-agencies dispatching platform. The goal was to increase response times and improve the city's ability to respond to complex incidents.

Unfortunately, the technology vendors tasked with the project focused too much on making their own software work, rather than on understanding the subtleties of the existing systems it was to replace. Combine that with insufficient staff training, a largely ignored need to clean and integrate data before implementation, and the lack of a unified leadership team to bring together employees under three separate agency commands, and you have a recipe for disaster.

The results are telling - an IT nightmare now referred to as "Bloomberg's $2 Billion 911 Debacle" by the press and directly blamed for the loss of lives during the city's 2010 blizzard and again during Hurricane Sandy in 2012.

The lesson? The most important link in a technology implementation is the people using the system. They need clear leadership, extensive training - and most critically, an opportunity to provide feedback and insight on what does and doesn't work in the 'real world'.

In a city with one of the world's oldest and largest subway systems, Gotham straphangers have long assumed that accurately determining when the next subway train will come is somewhere between mythology and magic.

However, the New York City Transit Authority successfully began implementing on-platform countdown clocks at key stations on part of the system, starting in 2010. Since then, the countdown clocks have been extremely successful, and are now complemented by automated voice announcements and real-time feeds to smartphone apps.

What made this project - one just as complex as 911 databases or bike share systems - work effectively?

First, the Metropolitan Transit Authority (MTA) tested multiple competing technologies in real-world conditions, through a detailed pilot program. Some of the technologies held out better than others, and these results were able to be used in shaping the RFP process and selection criteria. Second, the MTA invested $213 million in upgrading key signalling systems first -- making sure that the technology backbone was solid and stable, before rolling out new features. Third, the agency implemented the technology in one major part of the system but isolated that from the rest of the subway until it was proven to work (remember that the NYC Subway is actually comprised of what were three separate and incompatible private subway systems). And fourth, the MTA opened up robust APIs to allow a throng of developers to access data streams, create apps and contribute to meeting customer needs.

The result is ironic: While complaints about the system are few and far between, politicians and straphangers are instead upset that the rollout isn't happening faster, as everyone is eager to access a system that seems to actually work.

Ultimately, that's the point - creating systems that work - for your employees and customers.

In summary, here are the valuable lessons learned from these New York City projects:

1. Quality starts with content. Remember that the quality of a new system is only as good as the data and workflows that go into it. Feeding bad data and poorly-mapped processes into good software will destroy any implementation.

2. People come first. That's true not only in terms of training employees to use the system, but also in terms of seeking their input to design and implement it.

3. Know the technology. A system is really an assemblage of individual component parts. If the hardware is proven but the software is new, or if two software components are integrating for the first time, then tread carefully.

4. Focus on fundamentals. Before installing the shiny upgrades and optional modules, get the core functions and backbone elements operating smoothly. They are the heart and soul of your systems.

5. Leadership and collaboration drive quality. Working with enthusiastic and engaged partners - including a unified leadership team and a knowledgeable group of users and developers alike - will make the difference in your project's success.

Whether you are the CEO of a startup, growth or mid-market company looking to upgrade your ERP system, implement a new CRM, install a marketing automation system or build a new website, follow these five steps to achieve software success in your business.

Reducing Friction in Your Sales Process

END_OF_DOCUMENT_TOKEN_TO_BE_REPLACED 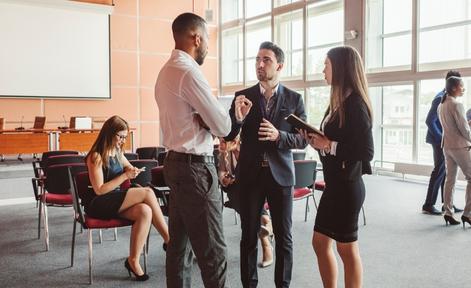